Mar 02 2020
Republicans Still Trying to Make Voting Harder in Missouri
The House of Representatives on Feb. 26 granted preliminary approval to legislation that takes a third shot at trying to require voters to possess government-issued photo identification in order to cast a ballot. The Missouri Supreme Court struck down the first two laws Republicans enacted to impose a photo voter-ID requirement, ruling they unconstitutionally infringed on voting rights.  The most recent ruling came in January.

Republican supporters claim a photo voter ID requirement is needed to stop voter fraud. However, as the Supreme Court noted, voter impersonation at the polls is the only type of fraud a photo ID could prevent, but there has never been a documented case of voter impersonation in Missouri. Democrats contend the true purpose is to disenfranchise racial minorities and certain other demographic groups that are most likely to lack a government-issued photo ID and, not coincidentally, tend to support Democrats.

The House approved the measure, House Bill 1600, on a voice vote. A second, recorded vote is required to send the bill to the Senate. If HB 1600 clears both chambers and is signed into law, another lawsuit challenging the bill as unconstitutional is expected.
The 12th Annual Wiggins Fund Event

Jackson County is one of the very few counties in Missouri with dedicated year-round staff supporting the Democratic Party.  The Executive Director position has been a model for other counties and regions for over a decade and, without it, challenges in fundraising, candidate recruitment, institutional memory, communication and more would mount and make our main objective more difficult: electing more Democrats.

Please consider attending on March 5, 6pm at Travois (310 W 19th Terr. KCMO) or donating a little each month through the Executive Director's Circle HERE.  RSVP for the event HERE or just come on out March 5.

Missouri has a long history as a bellwether state and this event will show candidates why Missouri shouldn’t be forgotten or taken for granted. We’re proud of Missouri’s diversity, and believe that it is a strength for Democrats in the state. From Missouri’s great farming communities to its grand cities, Missouri is truly representative of America. Having an event of this magnitude gives voters and candidates a chance to connect, build excitement, and set up campaign infrastructure before we come together to ultimately defeat Donald Trump.

This event is being hosted and coordinated by the Missouri Democratic Party. CLICK HERE for more details and learn how you can attend. 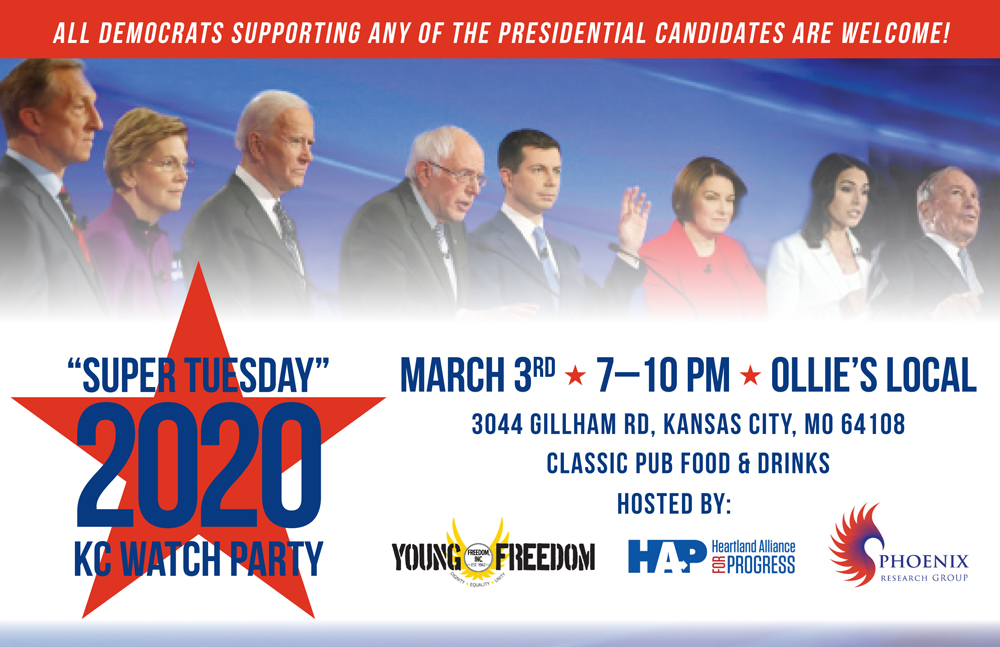 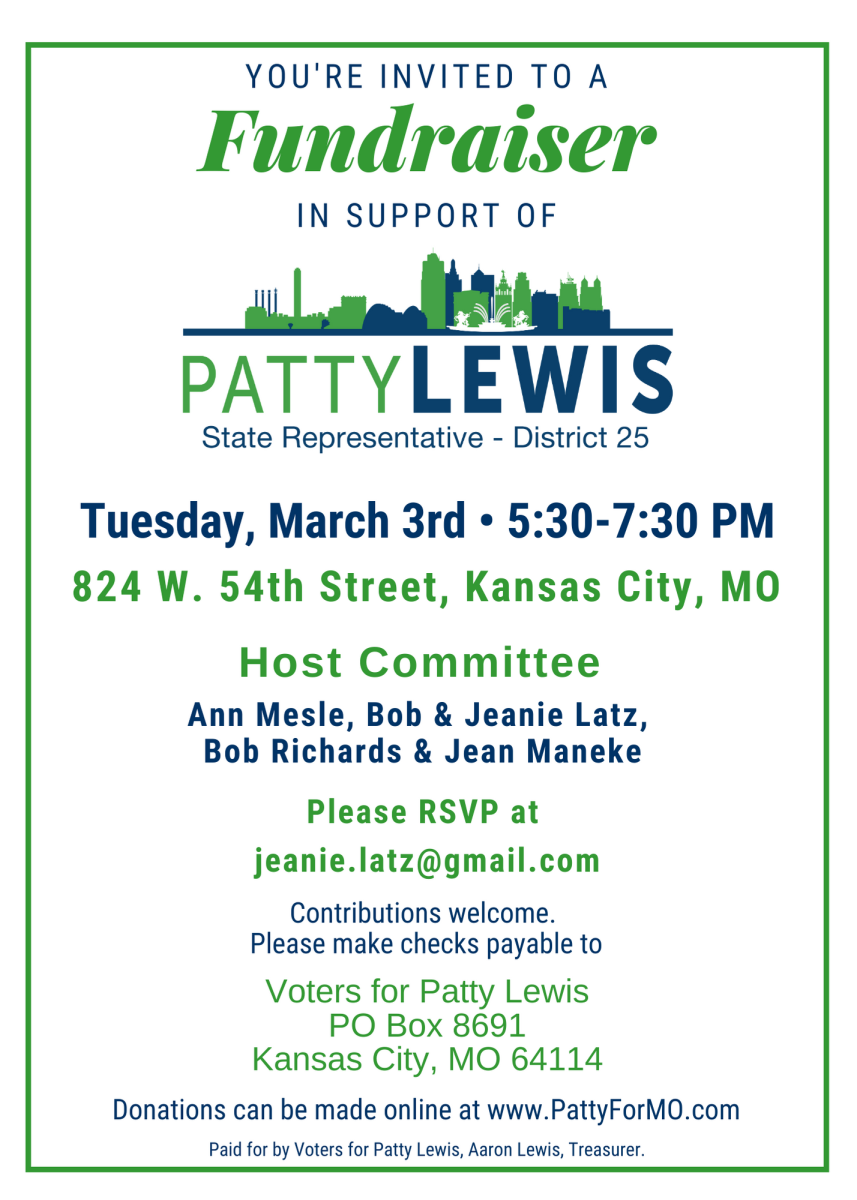 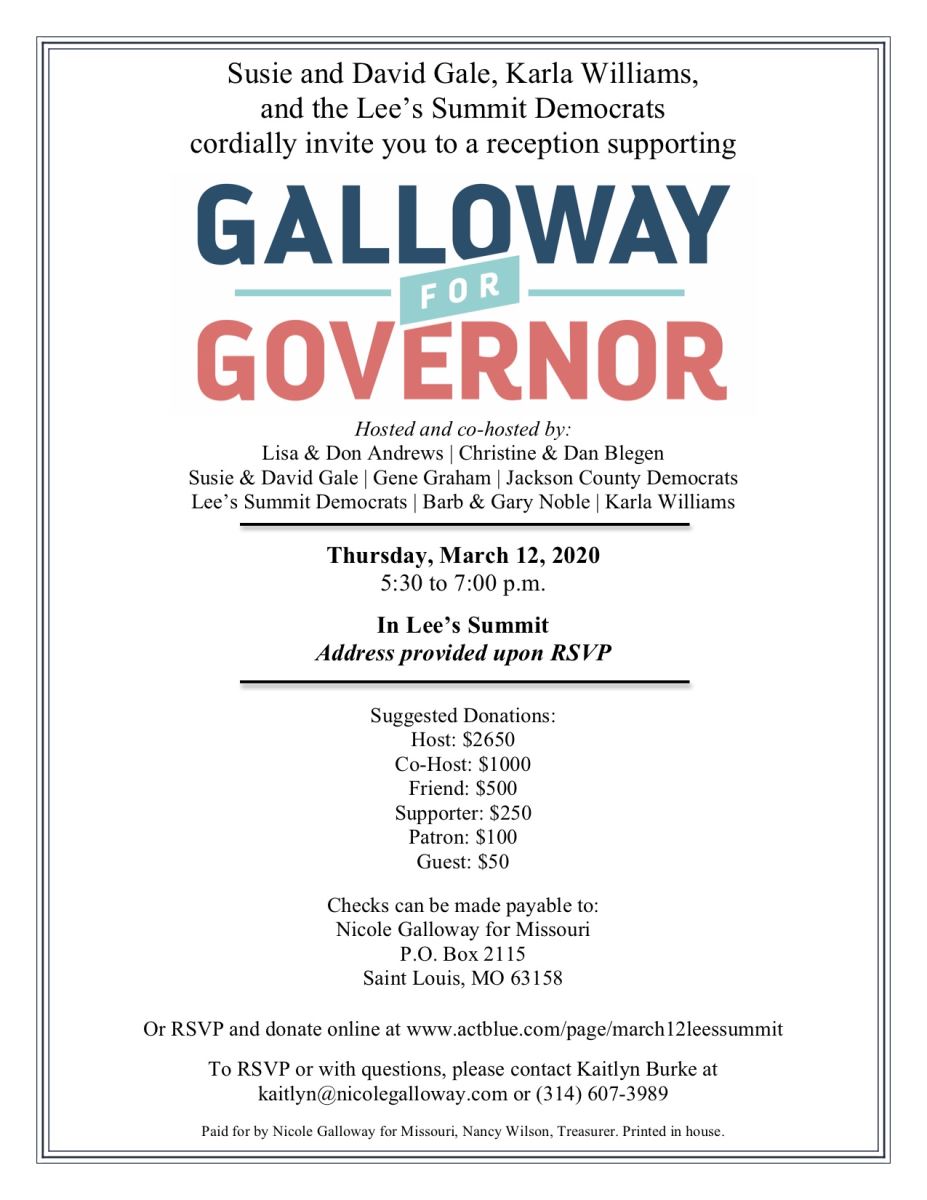 With the Missouri primary one week away, you can visit the official Kansas City office for the Sanders campaign at 3630 Main St. KCMO 64111.  Volunteers are needed for canvassing and phone banking shifts.  Office will be open from 9am to 9pm beginning March 3.

Coming Out for Warren

Join us at the KCMO Hamburger Mary's for one of our final Warren Volunteer Events!

Monday March 9th to Get Out the Vote for Elizabeth!

We will be joined by special guests, Rep. Rui Xu and Mayor Mike Kelly from Kansas! SIGN UP HERE.

Join us in St. Joseph at our Missouri for Biden Organizing Event to show your support for Joe! We’ll be talking to voters about our campaign and what’s at stake in this election.

All are welcome to attend and meet other Team Joe members. Make sure to bring a friend or two! SIGN UP HERE.

Disclaimer: The JCDC does not endorse in primaries where there is no incumbent and will not endorse in the Presidential primary until a nominee is secured at the convention. We also do not get actively involved in non-partisan races. We strive to equally and fairly provide information about all candidates so our supporters are aware.