Every Missourian should be able to vote. This value isn’t partisan and has nothing to do with politics.

Voters should have their voice heard at the ballot box without fear of getting sick from the coronavirus.

Our entire nation saw what happened in Wisconsin this past week. Most polling places were forced to close down and voters in Milwaukee were packed into only 5 polling locations on Election Day. The National Guard had to staff the polling stations and they, along with voters, put their lives on the line so that an election could take place.

It doesn’t have to be like this. Missourians deserve the ability to safely cast their ballot even during this unprecedented pandemic. We have multiple elections coming up.

The Republican government in Missouri has continuously passed the buck on voting access: Governor Parson, after saying that voting access was a partisan issue, later passed it down to the Secretary of State. Ashcroft passed it down to the legislature and local authorities. Local boards have asked for direction from the state. Auditor and candidate for Governor Nicole Galloway has been on the side of the majority when it comes to ballot access and safety since the beginning of the crisis: citizens shouldn't have to risk their own health or the safety of others to get to vote. Let's make sure that opinion is heard by Parson so we can get no excuse absentee and early voting.

Click HERE to add your name to Galloway's petition

The nonpartisan election forecaster Cook Political Report shows top Missouri Democrats are breaking away from their Republican opponents. Nicole Galloway’s race for Governor was upgraded from Solid R to Likely R and Jill Schupp’s race for Congresswoman in MO-02 was upgraded from Likely R to Lean R. Both are steadily working their way toward “toss-up” status in a tough state. Republican insiders have privately recognized that they are on shaky ground in suburban Missouri. Fueled by gross mismanagement of the coronavirus response and changing attitudes on gun safety and school funding that have been brewing for a long time, both Gov. Parson and Congresswoman Wagner are pleading to national Republicans for help to save their seats.

The General Assembly plans to reconvene on April 27 to complete the final three weeks of the 2020 legislative session. In a joint statement issued April 15, the top four Republican legislative leaders said they had to balance the health and safety of lawmakers, employees and Capitol visitors amid the COVID-19 pandemic with the legislature’s constitutional obligation to pass the state budget.
“The decision to move forward on April 27 was not an easy one, however it is absolutely critical for the people of Missouri that we keep the state government funded and services operating without interruption,” the statement said. “We will use the intervening time to monitor the trajectory of Missouri’s coronavirus cases as well as assess the impact of newly issued federal guidance and disaster funds on the state budget.”
The legislative session largely has been suspended since mid-March, although both chambers did briefly reconvene on April 8 to pass an emergency spending bill covering the final months of the current fiscal year.
If lawmakers return April 27, there will only be three weeks remaining in the legislative session before its constitutionally mandated end at 6 p.m. on May 15 and only two weeks until the May 8 constitutional deadline for passing the FY 2021 state operating budget.
Although the statement indicated the focus would be on the budget, there are indications Republicans, who hold supermajorities in both the Senate and House of Representatives, may try to salvage parts of their political agenda during the session’s closing weeks, including passing a proposed constitutional amendment that seeks to reverse the Clean Missouri redistricting reforms voters overwhelmingly approved just last year.
At his April 14 press briefing, however, Republican Gov. Mike Parson said that when lawmakers return their only priorities, other than the budget, should be legislation related to the state’s COVID-19 response and restarting Missouri’s economy.
“We’ve got to get the economy going, and we’ve got to get people back to work because if we don’t do those things, the rest of the priorities are not going to matter much,” Parson said.
Until recent days, it had been expected that lawmakers likely wouldn’t return for the remainder to this year’s regular legislative session and instead pass the state budget during special session in late May or early June. Some lawmakers questioned the wisdom of reconvening in late April, which is right around the same time the pandemic is currently anticipated to peak in Missouri.
House Minority Leader Crystal Quade, D-Springfield, agreed with the governor that if lawmakers return the Capitol, the agenda should be limited to passing the budget and enacting only those laws necessary to assist the state’s COVID-19 response and providing economic relief to Missouri workers and businesses.
“Under no circumstances should the lives of the public, legislative staff and lawmakers be jeopardized to advance a partisan political agenda or grant special interest favors,” Quade said.
Delegate Selection - Less Than Two Weeks Left to Apply
The State and National Delegates to the Democratic Conventions are elected by local Democrats just like you. Visit www.missouridemocrats.org/2020 to get all the information. The process is easy to 1) sign up to receive a ballot or 2) declare yourself to be a delegate at any level.  The chance to participate in this part of the process only comes every four years! 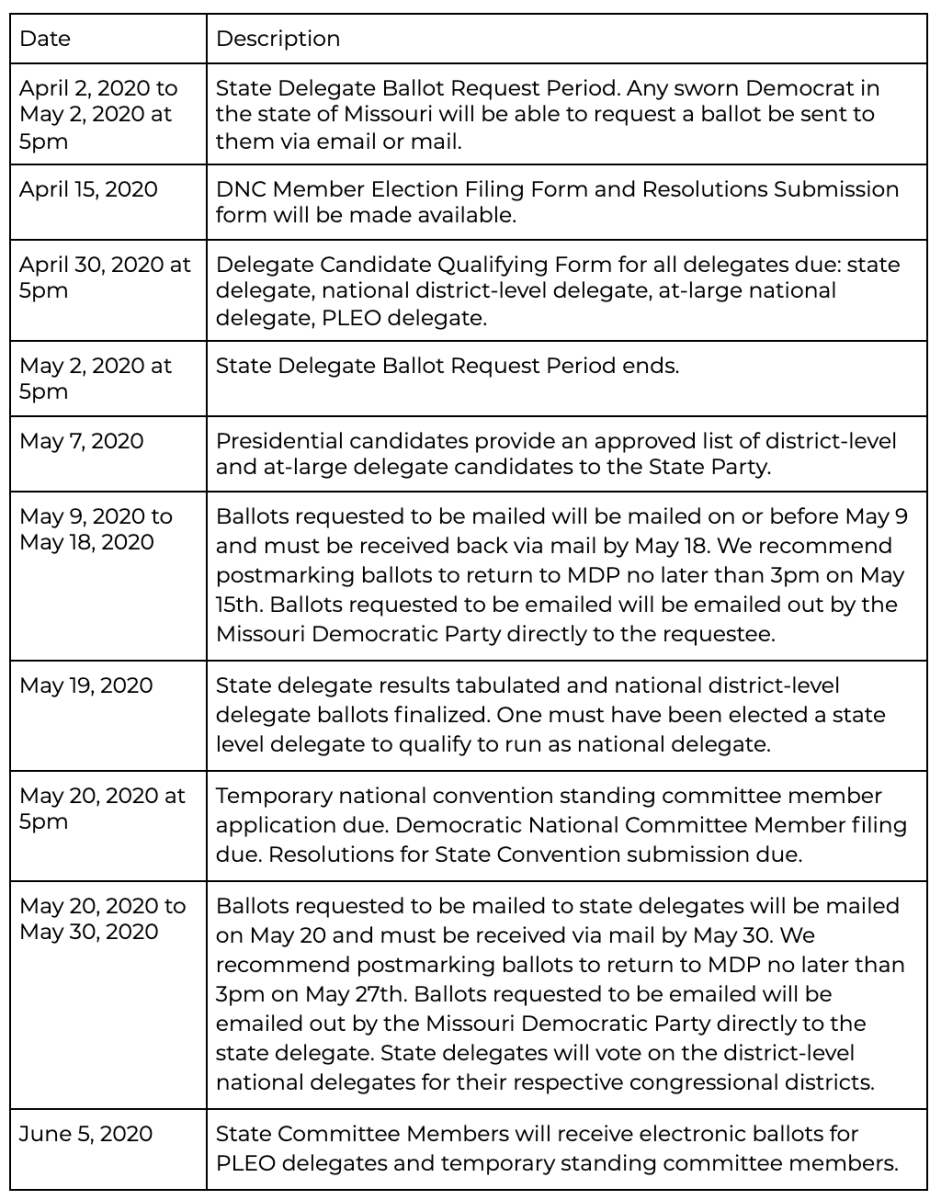 Click here to stay up to date on the process, request your ballot or declare to be a delegate for the state or national convention.

We Still Need Your Support

It's hard to ask for donations during this time but here are the facts:

While we are very optimistic that Truman Gala (which is our biggest source of funding every year) will happen this fall, we need funds to keep operations going through the summer. The JCDC minimizes overhead and makes every effort to direct our revenue toward our common goal: reaching and persuading voters to win general elections.

If you can, please consider donating $10, $20 or more directly to the Jackson County Democratic Committee today. 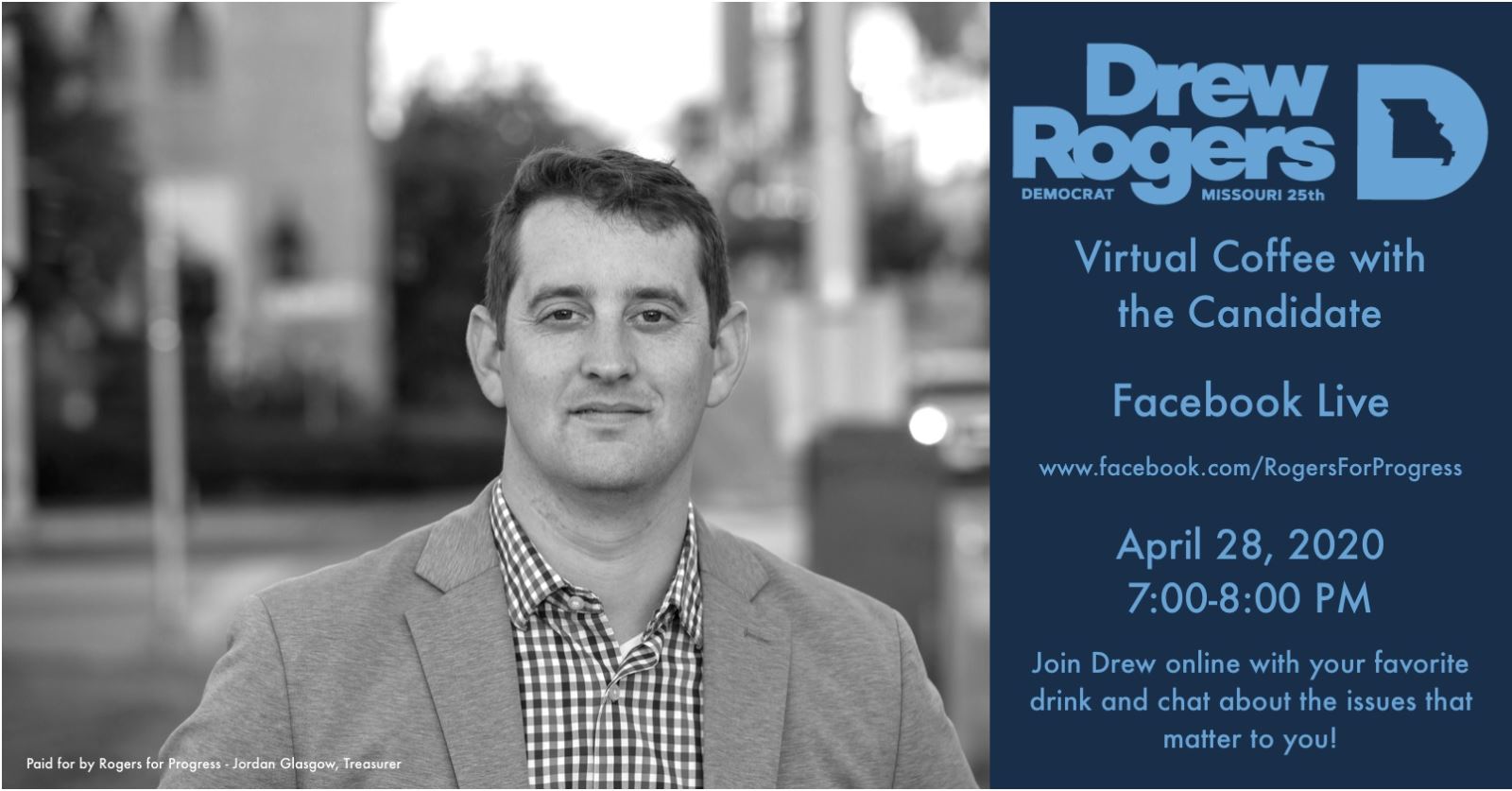 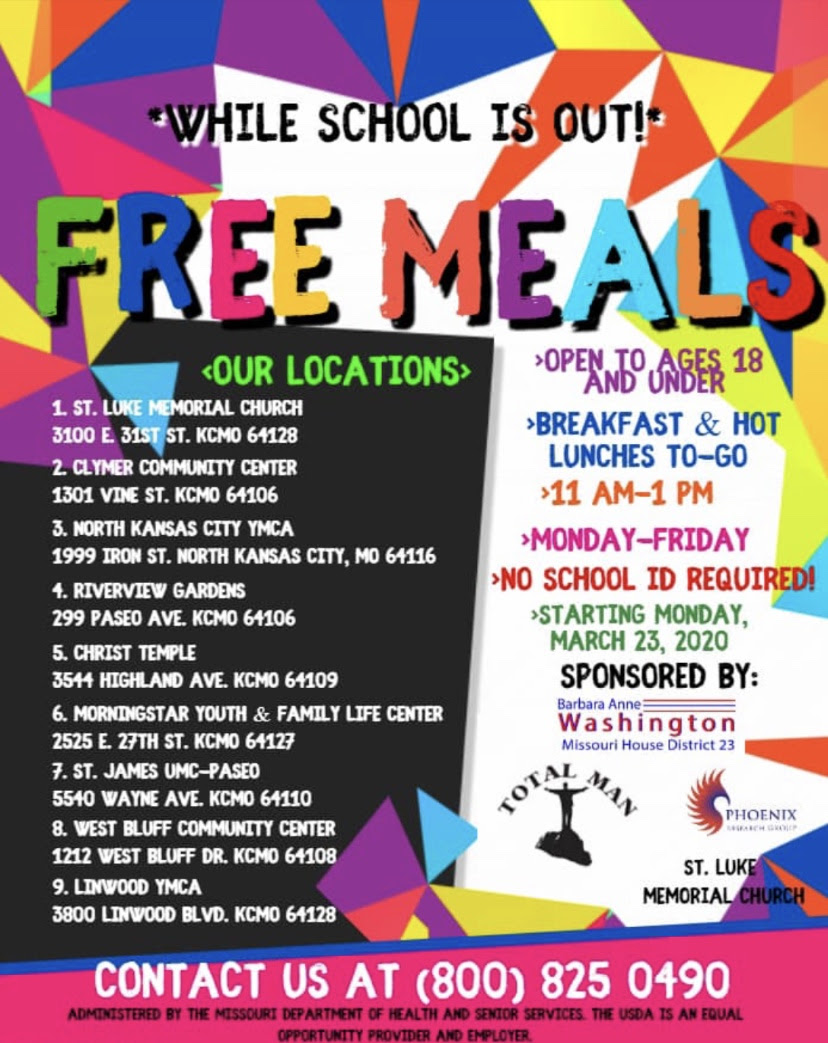 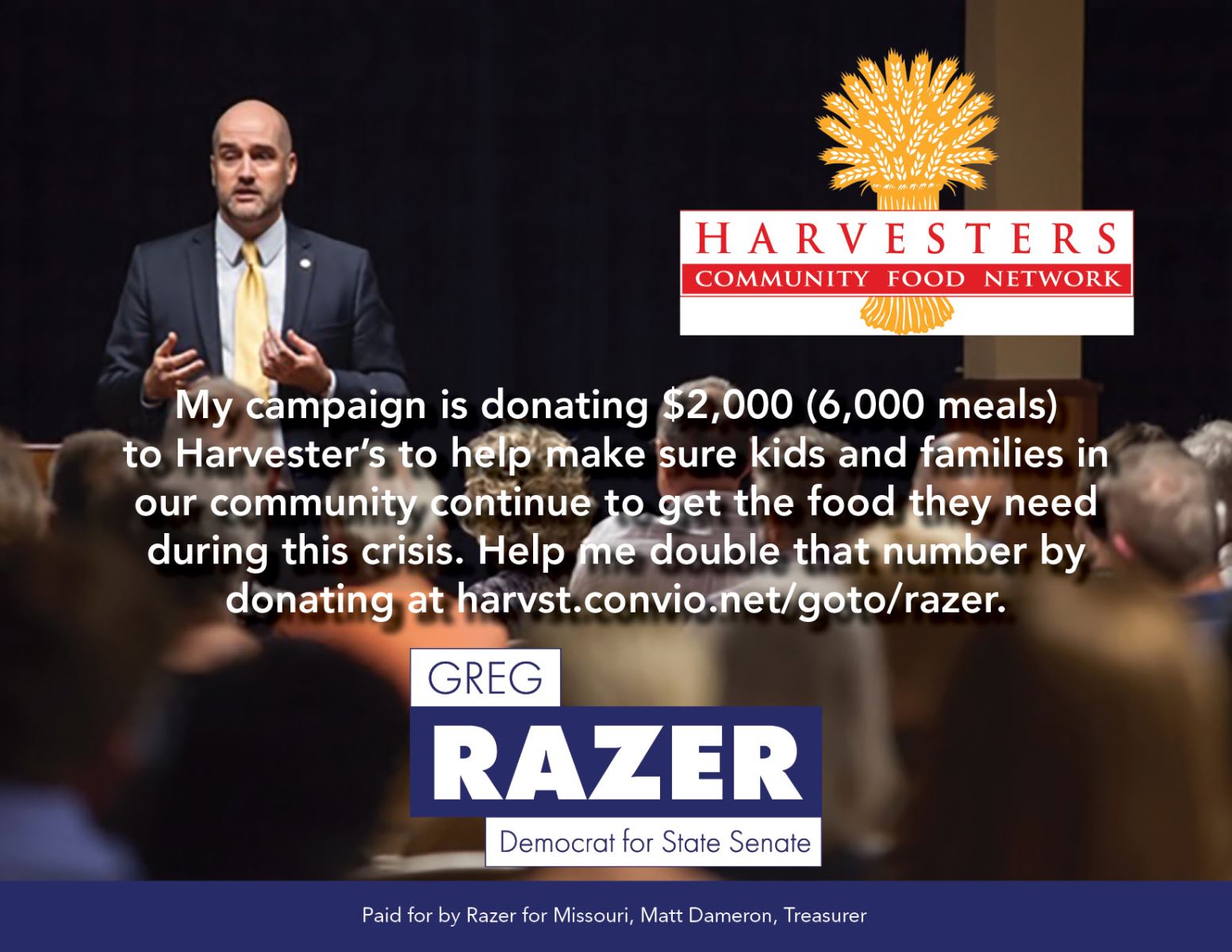 The Truman Gala (originally scheduled for June 6th) has been postponed until further notice. We are looking at dates in the late summer or early fall while respecting the orders and suggestions of both local elected leaders and medical professionals. More information will be coming when it is available. Meanwhile, we still have ongoing expenses. If you can kick in a few dollars to the local party, we greatly appreciate it. Click HERE to donate what you can.