May 13 2020
Jefferson City Update: Unusual Budget Passes
With little time to spare before the constitutional deadline, the Republican-controlled General Assembly on May 8 granted final approval to an unbalanced state operating budget for the 2021 fiscal year that simultaneously makes deep cuts to general revenue spending while also being overinflated with spending authority for federal dollars that might never materialize.
On paper, the $35.29 billion FY 2021 budget appears to be a massive increase over the $29.66 billion in appropriations lawmakers approved for FY 2020, which ends June 30. However, an appropriation is merely the legal authority to spend money and doesn’t guarantee actual dollars will be available to cover the authorized spending.
As a result, the seemingly robust overall total in FY 2021 spending authority masks the deep chasm between money budget officials are reasonably certain will come into the state treasury and the spending promises made in the appropriations bills.
For example, the House version made permanent late-year spending cuts for FY 2020 Republican Gov. Mike Parson recently made to higher education but also imposed an additional 10 percent general revenue cut. The final higher education budget replaces the 10 percent general revenue cut avoids the additional 10 percent reduction but does so by filling the hole with federal dollars of uncertain existence.
Although the Missouri Constitution doesn’t require the legislature to pass a balanced budget, it does require the governor to maintain one and empowers him to do so by making unilateral cuts. By over-appropriating federal funding, the legislature gives Parson tremendous discretion on how the money the state does receive is spent. Sometime before the start of FY 2021 on July 1, Parson likely will announce the cuts he will need to make since lawmakers didn’t.
After the General Assembly largely went on an extended break due to COVID-19 in mid-March, the budget process was weeks behind schedule when lawmakers returned to the Capitol on April 27 in hopes of enacting a final budget by the May 8 constitutional deadline. As a result, about six weeks of work was crammed into just two weeks.
Reminder: State Convention Now Virtual
The Missouri Democratic Party released a statement declaring that the state convention will not be held in person this summer as originally planned. Instead, they have taken best practices from other states and will move forward with a virtual convention including online balloting for delegate selection. The statement is here: The Missouri Democratic Party today announced it has filed a formal ethics complaint against Liberty Alliance USA for violating campaign finance law and failing to register as a committee with the Missouri Ethics Commission. The complaint details how Cornerstone 1791 — the mysterious group behind Liberty Alliance USA — has violated their 501(c)(4) status by spending money  and directing most of their activity towards defeating Nicole Galloway in the gubernatorial election.

“Liberty Alliance USA is nothing more than a political committee designed to defeat Nicole Galloway — and should have registered and reported as such since its launch,” said Missouri Democratic Party Executive Director Lauren Gepford. “Instead, shadowy dark money donors have used Liberty Alliance USA to illegally target Galloway in blatant violation of Missouri law. Liberty Alliance is nothing more than a dark money front for secretive big money donors to buy this election for Mike Parson.”

MEDICAID EXPANSION GROUP FILES INITIATIVE PETITION WHILE REPUBLICAN LAWMAKERS CONSPIRE TO IMMEDIATELY REPEAL IT
(via Rep. Ingrid Burnett)
Republican lawmakers have refused to expand Medicaid eligibility in Missouri for years under the federal Affordable Care Act, and on May 1, a coalition of health care advocates filed an initiative petition for a proposed constitutional amendment that would take the decision out of their hands. Having gathered more than 346,000 Missouri voter signatures, the group Healthcare for Missouri delivered the submitted signatures to the Secretary of State’s Office. The number of signatures delivered is more than double the roughly 172,000 signatures required to qualify the Medicaid expansion proposal for the November ballot. Elections officials must now verify that enough of those signatures are valid to hit the minimum number, a process that should be completed by early August.
Meanwhile, the House budget committee is noticed up to vote on a resolution Monday, that would potentially be put on the same ballot, and would allow the General Assembly to simply ignore the amendment should voters then pass it. I want to draw your attention to a specific section in SJR 106 that is particularly alarming.
Missouri is one of just 14 states that haven’t expanded Medicaid eligibility under the ACA, under which the federal government pays for 90 percent of the cost. The law allows states to cover Missourians earning up to 138 percent of the federal poverty level, which translates to an income of roughly $17,600 for an individual or $30,000 for a family of three.
Medicaid expansion would provide health care coverage to an estimated 230,000 Missourians who don’t currently have it, including many workers at low-wage jobs that don’t offer health benefits. The proposed amendment would constitutionally compel the state to expand Medicaid coverage up to the ACA eligibility threshold and prohibit the state from imposing new requirements or restrictions on eligibility.

An analysis of the fiscal impact of Medicaid expansion in Missouri provided by the Center for Health Economics and Policy concluded that “by 2024 the annual savings due to expansion is estimated to be about $932 million.”

A Note from Rep. Judy Morgan

On my way home from Jeff City last Friday, I got a call from my husband Gene.  He told me that he had terrible chest pains, was having trouble breathing, and was driving himself to St. Luke's Hospital.  Fortunately, I was only about thirty minutes from home and went directly to the Emergency Room.  When I got there, I was told that I couldn't see him because the hospital wasn't letting in any visitors (because of the COVID19 pandemic).
So, we had to communicate by phone/text for the next couple of hours.  At about 7:30 p.m. we talked and Gene was headed to emergency surgery.  He had an an aneurysm in an artery close to his heart, it was life-threatening, and he needed immediate surgery.
I was allowed to see him for about twenty minutes at 4:00 a.m. on Saturday morning.  The hospital staff   told me that will be the only time I can see him, again because of COVID19.  Gene made it through the surgery, but still has the breathing tube in, has suffered some seizures, and is in ICU.
It's so hard not being able to see him, talk to him, or hold his hand.  Our daughter Courtney, son-in-law Roby, and our grandkids traveled from their home in Wentzville to be with me.    My family is a great comfort at this very stressful time and I  love and appreciate them immensely.
I've never missed a weekly update during the legislative session since being elected in November 2011.  My thoughts are only with Gene and his well-being at this time.  So I hope  you'll understand that I won't be writing an update this week and I will miss the last week of session to be here for Gene.
Courtney, Roby, Alex, Olivia, and I love Gene so much - he's the best husband, dad, and grandpa.   Please keep Gene and our family in your thoughts and prayers.
Gene has been a long serving member of the JCDC and currently serves as the board's parliamentarian. He is well loved and respected by anyone who knows him and we all wish him a speedy recovery.

We Still Need Your Support

It's hard to ask for donations during this time but here are the facts:

While we are very optimistic that Truman Gala (which is our biggest source of funding every year) will be held on September 26, we need funds to keep operations going through the summer. The JCDC minimizes overhead and makes every effort to direct our revenue toward our common goal: reaching and persuading voters to win general elections.

If you can, please consider donating $10, $20 or more directly to the Jackson County Democratic Committee today. 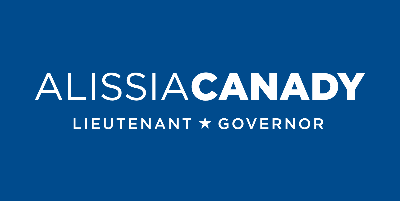 Today, launching her statewide campaign for Missouri Lieutenant Governor, Alissia Canady will host a town hall to introduce herself to Missourians and take questions from members of the public. This spring, Canady – a former Kansas City Councilwoman and Jackson County Assistant Prosecutor who has committed more than a decade to fighting for working families – announced her candidacy for Lieutenant Governor. To promote social distancing and protect Missourians from COVID-19 transmission, the town hall will be held via livestream with a Q&A, today.

WHEN: Today Monday, May 11 at 6 p.m. CST
WHERE: Live from the VFW World Headquarters in Kansas City and available at 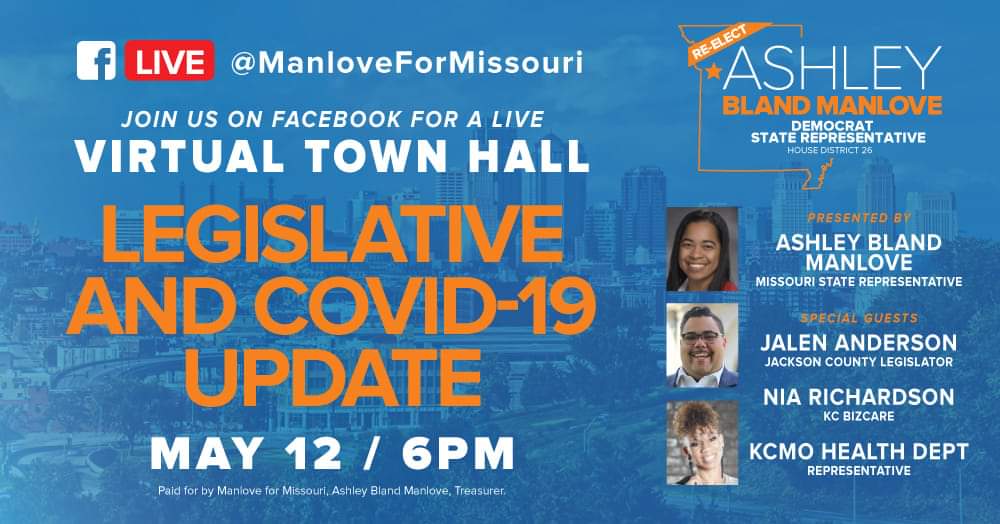