Missouri House of Representatives Shut Down for Next Week

Things got off to a rough start in Jefferson City. In the first hours of session, safety protocols were turned down by Republican leadership in regards to mask mandates and distancing to prevent potential spread of COVID-19.  Unsurprisingly, multiple members of the house have tested positive and been exposed resulting in the House Speaker announcing there would be no action for the week starting January 18th. The Senate also had members exposed but will go on as scheduled.

Last year, the same thing happened resulting in the long term hospitalization of Jackson County State Rep Joe Runions days after Republicans laughed about the virus being a hoax and refused to take any preventative measures.

Personal responsibility through the pandemic is a critical part to keeping people healthy and getting business back to normal. It has also been proven to be a gross failure of a standard by Republican leaders from Governor Parson down to rural municipal governments.  Please take the advice of health professionals seriously.

With right-wing extremists planning protests in Washington, D.C., and all 50 state capitols on presidential Inauguration Day and concerns their actions could turn violent, the Missouri House of Representatives had previously agreed to only hold a procedural session on Jan. 20 so that most lawmakers and legislative staff need not be present in the event violence does unfold. This is, fortunately or unfortunately, not relevant now.

Security officials in Missouri and elsewhere are on high alert after an insurrectionist mob incited by departing President Donald Trump and other Republican officials stormed the U.S. Capitol on Jan. 6 in an attempt to stop Congress from certifying President-elect Joe Biden’s victory in the Electoral College. Biden, a Democrat, won 306 electoral votes to handily defeated Trump, who won 232.
The U.S. House of Representatives on Jan. 13 voted to impeach Trump for incitement of insurrection in the Capitol attack, making him the only president in American history to be impeached twice. The Democratic-controlled House previously impeached Trump just over a year ago on charges of abuse of power and obstruction of Congress, but he subsequently was acquitted the Republican-controlled Senate.
The Senate, which is still Republican-led at the moment but which will soon switch to Democratic control, does not plan to conduct a trial on the latest article of impeachment before Trump leaves office when his term expires at noon on Jan. 20. Even though Trump will no longer be president, an impeachment trial is still expected to take place in the coming weeks. If convicted, Trump would be prohibited from ever again holding public office.

Over the past two months, local and state Democrats have learned from the numbers and candidate actions what are strengths, weaknesses and opportunities are as we move toward the 2022 campaign cycle. The most important thing we can be doing in Jackson County is putting resources toward voter registration, specifically in Kansas City's core and Independence.

Voter registration will be the biggest focus for 2021 and lead into our county wide turnout and persuasion efforts across the area. With legislative redistricting and a US Senate race, we can't waste the momentum Democrats are showing nationally.

Show your commitment toward progress in 2022 by giving to our registration drive campaign.  Funds received here will stay entirely in Jackson County and be used to find new voters and update registrations of lapsed voters. Missouri can look like Georgia soon and this is the best path to get there!

If you are interested in joining one of Jackson County's most active Democratic clubs, join them Thursday, January 21 at 7pm via Zoom.

Please join the meeting a little early (15 minutes), so we can get everyone signed in.

The Chair of the Clay County Democratic Central Committee sadly reported that longtime volunteer, trainer and office manager Donna Cushman peacefully passed away early this week. She was as hard working and loyal of a Democrat and friend that countless people across the region ever got the pleasure to meet.

While she is irreplaceable, her legacy continues through the dozens of volunteers who worked under her and numerous current and past elected officials across Clay County.

As has been the case with many others we have lost from our community in the last year, a celebration of life will have to wait until a later date. 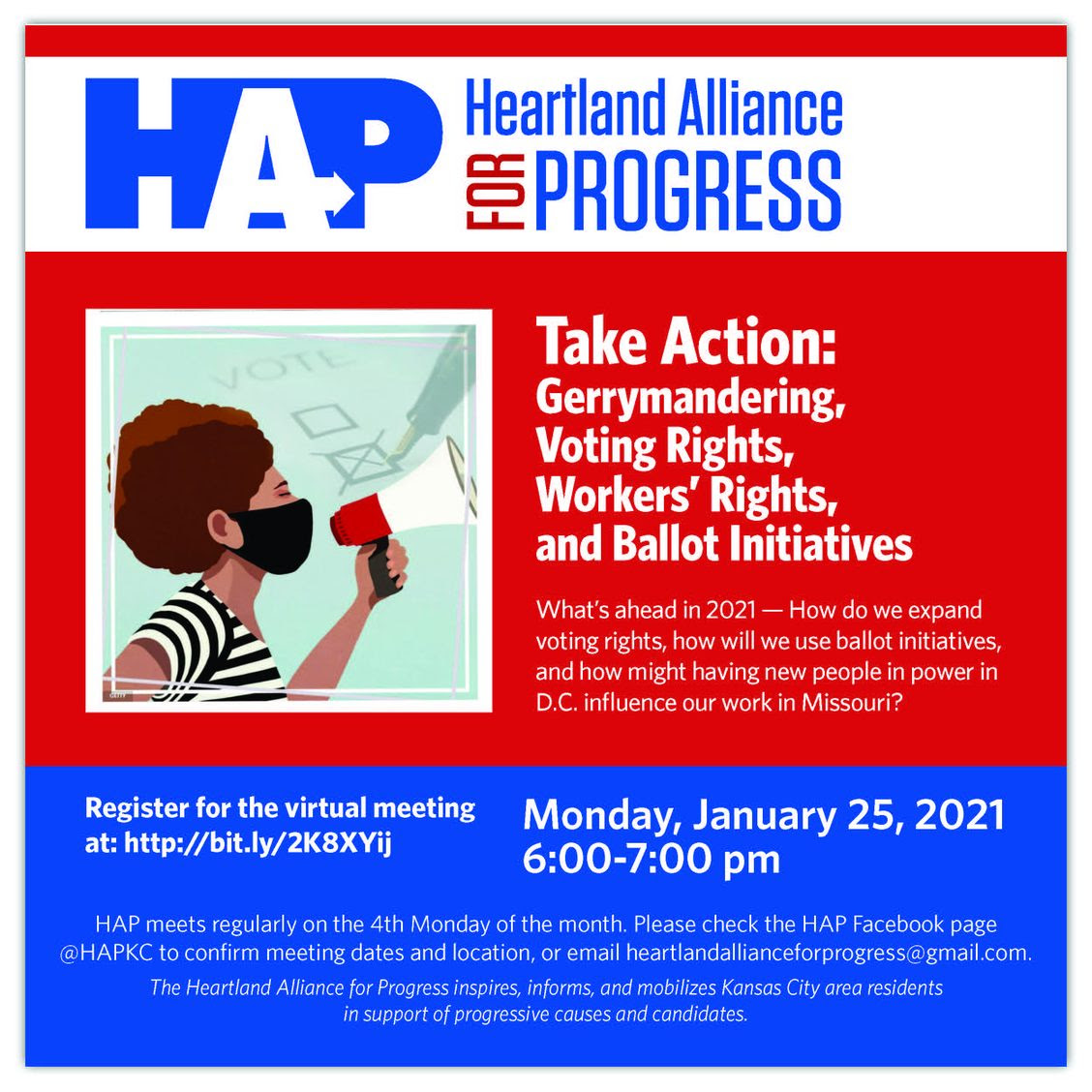 Support the MDP by Sticking It to Josh Hawley

Visit the Missouri Democratic Party's virtual store and help the rebuilding of our statewide campaign infrastructure.