Jul 20 2020
Notaries Are Available for Your Mail In Ballots
The Jackson County Democratic Committee, friendly non-profits and others have done a great job collecting volunteer notaries from around the area who are willing to come to your home or convenient location to get your mail in ballot for the August and November elections notarized at no cost. If you need on, contact us: geoff@jacksoncodems.org or 816-878-0560 and we will schedule a time.  Ballots must be RECEIVED by the election board by election day, so don't wait til the last few days.
In person absentee voting continues through the Monday before the election if this is an option for you. Check out the rules here:
Kansas City Election Board: http://Office is open Tuesday and Thursday this week from 11-3. 308 W Maple Independence MO 64050. Signs are $6.
Jackson County Election Board: https://www.jcebmo.org/forms/absentee-voting/

Having schools reopen next month or even later in the fall is a difficult and complicated question that takes collaboration, leadership and scientific research to come up with the best, safest answer. Parson and the Trump administration want none of that. Here’s another real quote from Governor Mike Parson last week in a radio interview when asked about schools reopening with Coronavirus numbers back on the rise:

The unelected Governor failed to mention the teachers, support staff, volunteers or of course the parents of the students that will become infected and how that will be dealt with.

There's really no walking Parson's statement back: he knows schools will lead to more infections, absolutely doesn't care about what the consequences will be, and has no interest in coming up with a plan better than just accepting that fact.  But as of Monday afternoon, he tried! In a Trump-like move, he claimed his comments, which can be heard or read in the transcript, were taken out of context. Ok man, whatever. He still hasn't learned that when you are the Governor, everything is being watched and recorded, especially live radio interviews.

But That Wasn't All from Parson Last Week

As state revenues continue to fall short due to the COVID-19 pandemic and in an effort to balance the Fiscal Year  2021 state budget,    Governor Parson  unilaterally withheld  $448.85 million in spending authority and issued 17 line-item vetoes of  another $11 million.   FYI - the 2021 fiscal year runs from July 1, 2020 through June 30, 2021.
If state revenue collections improve,  Parson can release the withheld funds later on in the fiscal year.  However, the line-item vetoes will stand unless the legislature votes to override the governor during our September veto session, which appears unlikely.
Since the Republican-controlled General Assembly in May had authorized far more general revenue spending than the state expects to collect this year, thus creating an unbalanced budget, we expected this hit to the FY 2021 budget.  Gov. Parson's latest action on the FY 21 budget include;
Regarding the Parson's line-item vetoes of $11 million, the biggest cut at $5 million impacted the State Road Fund for maintenance and repair of low-volume highways.  Other reductions included: $1.1 million  for improvement, renovation, and maintenance of an airport owned by the University of Central Missouri and $1 million  for the Harry S. Truman Library,  In addition, the proposed 6-cent increase for mileage reimbursement was eliminated across many funds, departments, and agencies.
Keep in mind that Gov. Parson had already imposed a budgetary reduction of $432.9 million  for the Fiscal Year 2020, which ended on June 30, 2020.  These cuts primarily targeted elementary and secondary education at $133.35 million and higher education at $41.27 million.  The bulk of the K-12 decrease in funding came from direct state funding to local public school districts.
Then He Called a Special Session to Look Tough on Crime
As expected, Governor Parson has called a special session to enact tougher crime laws. Here are the measures he wants to take up:
Assembly, of the State of Missouri in the First Extra Session of the Second Regular
Session;
Surrounded by police officials from around Missouri during his Capitol news conference, Parson glossed over the widespread demands for criminal justice reform, saying such issues are best left for the next legislative session in January. But he said the problem of violent crime can’t wait.
Last summer, House Democrats asked the governor to call a special legislative session to address gun violence after numerous children died in shooting incidents, but Parson at the time said the issue wasn’t an appropriate subject for a special session. He instead called one to create a special tax break on certain car trade-ins.
The session is formally slated to begin July 27, just one week ahead of the Aug. 4 primary elections. However, it isn’t expected that the session will start in earnest until after the election is over. Under the state constitution, the session could last up to 60 days, running through Sept. 25.
The proposal to eliminate St. Louis city’s residency requirement for police officers is already slated for the St Louis City November 3 ballot. So if the legislature enacts a residency repeal bill, it would render voters’ wishes on the issue moot. The other issues included in the call include making it easier to try juveniles as adults for certain offenses, allowing currently inadmissible testimony to be used against defendants in court, establishing a witness protection fund and increasing penalties for giving children firearms or encouraging them to engage in weapons offenses. Under the Missouri Constitution, lawmakers can only consider legislation the governor has requested in his call. However, once the session is underway, the governor has the authority to add other issues.

Stay Safe and Show Off With Locally Made Democratic Gear

Do you or friends need some new masks when you are in public places that will both show who you are and benefit local candidates and causes? Lee's Summit Democrats are offering branded hand-made masks available now!

Two different styles of masks are available for only $7.50 each.  Buy now online and have them delivered here.

Where the Jackson County Democrats Stand Going Into August

Last month, you may have read some frank and open remarks about the state of our organization.  Our offices have been closed to the public going back to the first restrictions imposed in Jackson County in March. In addition, all in person meetings, fundraisers and gatherings continue to be canceled. We have also advised all Democratic candidates to do the same until recently and then with great restrictions; some are going door to door but have been advised to wear masks and keep distance.  As COVID-19 rates have started rapidly rising again, we have must largely remain less accessable for the upcoming weeks or months. First, as we have said in the past few weeks, Truman Gala will not go forward in a traditional sense.  We will be announcing details of holding a diverse and exciting virtual event on September 26 featuring our annual award winners, state candidates, local and national office holders. We are also gathering campaign materials (buttons, signs, t-shirts, etc) and vouchers to area businesses to provide to our ticket buyers.  Other rewards for buyers and VIP donors are still being secured.

This is important because, historically, we have secured an overwhelming majority of our annual budget by late June. With the gala pushed back and unlikely to raise as much as a traditional event, we have cut all expenses to the bone through spring and summer while we still have a great deal of voter outreach and candidate support left to do between now and November.

We know you are getting asks by every campaign to contribute before the August primary. The Jackson County Democratic Committee keeps our funds local and will be prioritizing voter education, mail in ballots/notaries, new voter identification, and races we have the best chance of winning across the ballot. If you can help us, we will stretch your dollar as far as it will go.  Donate now if you can. 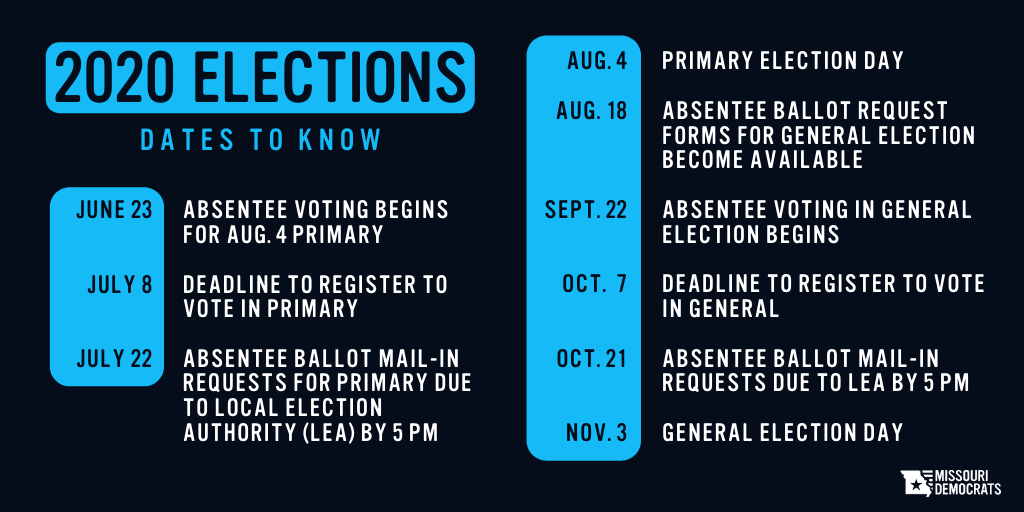 Missourians will now vote on Medicaid expansion on August 4 rather than in the fall. The date change makes it that much more vital to spread our message and win this campaign.

It’s even more urgent now that we expand Medicaid to keep our rural hospitals open, protect Missouri jobs, bring billions of our tax dollars home from Washington, and help hundreds of thousands of hardworking Missourians and their families gain coverage.

Nearly 350,000 of us demanded the chance to vote for Medicaid expansion and our persistence has paid off. Now the hard work begins. 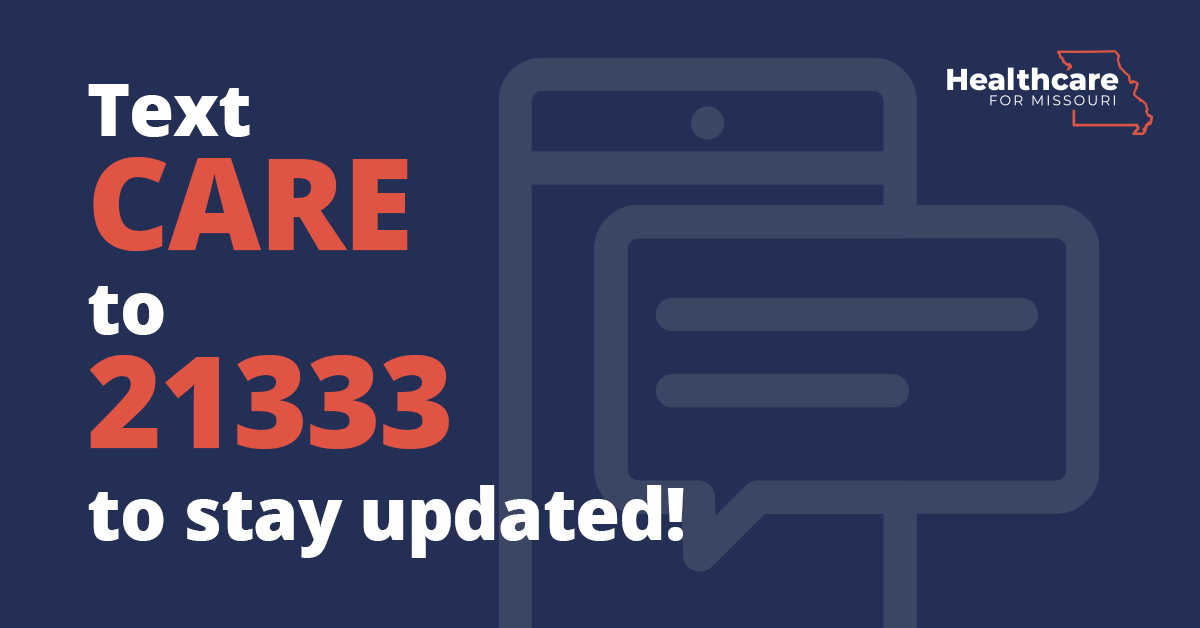 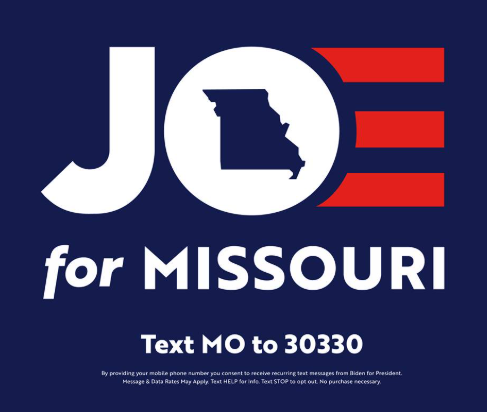